A recipe for Rhubarb Cream Pie was floating around Facebook a few weeks ago, and I shared it to my timeline. It reminded me of the Sour Cream Apple Pie recipe I was given years ago by my good friend, Wes Reid. Sour Cream Apple Pie has been a family favorite for many years, and if I were to forego making it for every holiday get-together, I would be in serious trouble.

A couple of weeks ago, I had rhubarb in the garden ready to pick, so I decided to try to adapt the Sour Cream ApplePie recipe, subbing in rhubarb and sour cream and a streusel topping, and see what happened. Oh, my goodness gracious, it might be even better than the Sour Cream Apple Pie. Dennis and I only got to eat one piece each before we had to catch the red-eye flight out to Denver, so my friend and neighbor, Yolanda, took it home with her when she came to water my plants. She said it was really good, too. With all that rhubarb in the garden, I thought I’d be making the pie again before I posted the recipe, so I didn’t take a picture of it.  But trust me, if you like rhubarb, and even if you think you don’t, you’ll want to try this recipe.

So here it is, and you’ll only find the recipe here, my friends: Rhubarb Sour Cream Custard Pie.  It can be made with gluten-free flours and lower-glycemic sweeteners as well.  You’ll need an unbaked pie crust to put it in. My recipe for gluten-free pie crust is linked at the end of the post.  Or use your favorite pastry crust recipe, or really streamline your pie baking and buy a crust.  I did it myself during the busy  years!

In a large bowl, mix together all ingredients except rhubarb. Put rhubarb in unbaked 9” pie shell and pour mixture over the rhubarb. Bake in 400 degree oven for 15 min., then reduce heat to 350 and bake for additional 30 min.

While custard is baking, mix the topping:

Mix well and sprinkle over pie at end of first cooking period. Return to oven at 400-425 degrees and bake for ten minutes to form streusel crust on top of custard. Cool completely before cutting. Store in fridge.

The Sour Cream Apple Pie recipe is on my Thanksgiving post, so I’ll link it for you here in case you want to try that pie as well. Also linked is my gluten-free pie crust recipe, made with gluten-free flour from WinCo’s bulk foods section, which I have recently learned is probably from Bob’s Red Mill. I have been using bagged Bob’s Red Mill gluten-free baking flour here in Denver, and it is identical to what I buy in bulk at WinCo. although twice the price.  Buy bulk if you can.

Happy pie baking! Use that rhubarb while it’s fresh. It’s good for you.

7/28/15:  I finally remembered to get a picture of this pie for this post, but before I could, a piece was already gone!  Yeah, it’s that good. 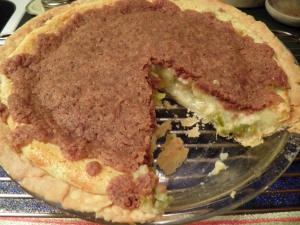