I owe the inspiration for this pie to two people: my friend, Wes Reid, who brought me an Apple Sour Cream Custard Pie one day many years ago (his partner, Lori Farias, had baked it), and my friend, Tara Johnson, who mentioned in a Facebook post that she was making a blackberry cream pie. Lori’s apple pie recipe evolved into my Rhubarb Sour Cream Custard Pie last summer. Tara’s blackberry cream pie turned out to be a riff on the Pioneer Woman’s blackberry cheesecake squares. But Tara’s choice of words got me thinking. I had Loganberries (a thornless blackberry) still ripening. Hmmm . . . would a sour cream custard work with blackberries? How would the cinnamon streusel topping go with the blackberries? I had to give it a try.

For some reason, I had a brain freeze when I got out my 10” pie plate and rolled out my gluten-free pie dough. Duh . . . the recipe is for a 9” pie! So my pie turned out a bit thinner than it should have. You’ll see that in these pictures. 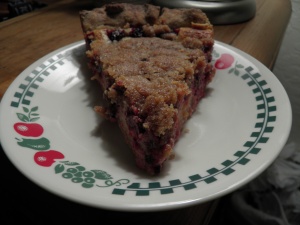 In a 9 inch crust, the custard layer would be thicker.  It is typical for the fruit (both rhubarb and blackberries) to float to the top of the custard as it bakes.  I made a few adjustments to the sour cream custard filling because although rhubarb is quite sour and releases a lot of water when it cooks, I’ve seen the juice that cooked blackberries release, and I had a feeling that they might water the custard down too much. Other than the goof with the pie crust size, the pie turned out perfectly! So here is the adjusted recipe, and I sure hope you still have some blackberries so you can try it. If not, you can use frozen blackberries, but thaw them and drain the juice off first. (Save it to drink—yummy—or make a syrup out of it to pour over some vanilla ice cream on top of the pie later!)

One 9-inch, uncooked pastry crust. See my gluten-free version if you like; I used some *homemade vanilla sugar in the crust for this pie.

1 ½-2 cups blackberries (if you rinse them, drain them really well before adding to pie crust)

2 large or extra-large eggs (I used my chickens’ eggs, which are a bit small, so I used 3 eggs)

For custard filling: Mix the flour, 1 cup of sugar, and salt together. Beat eggs, add to sugar mixture along with sour cream and vanilla extract, and mix well. Pour over blackberries in crust. 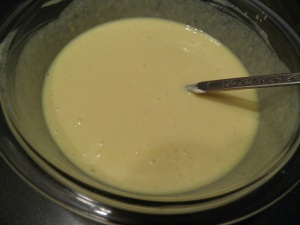 Bake at 400 degrees for 15 minutes. Reduce oven temperature to 350 and bake an additional 30-35 minutes, or until custard is set in the center. While the pie is baking, prepare the topping.

Mix topping ingredients together to make a streusel, set aside.

When custard is set, remove pie from oven and increase temperature to 425 degrees. Gently sprinkle topping evenly over the pie. 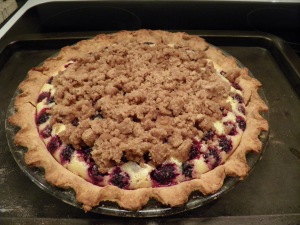 Remove pie from oven and cool thoroughly on a rack. You can eat this pie cooled, but it is best chilled with a dollop of fresh whipped cream on top. Store in fridge, covered.

*I bumped up the vanilla in this recipe in several ways: more vanilla extract than usual in the custard (and I used my homemade vanilla extract), vanilla sugar (scraped vanilla beans buried in a jar of white sugar) in the pie crust, and vanilla bean seeds in the topping. Why? Vanilla and blackberries go very well together! Vanilla adds the illusion of sweetness to a tart berry without adding more sugar.

*For the streusel topping, I used brown sugar this time, and I liked it with the blackberries. I have used white sugar and coconut palm sugar in previous versions of this pie (apple and rhubarb), and they all work quite well.

*I also used brown rice flour instead of all-purpose flour to keep it gluten-free.  I’ve discovered that brown rice flour is a perfectly acceptable substitute in all applications in this recipe (and many others).

I wish I’d been inspired to make this pie earlier in the summer, when blackberries were more plentiful. If you still have blackberries or can find them at a market, I hope you’ll give this pie a try.  My wild berries have been gone for a month, and the Loganberries are nearly done now, too. However, the sour cream custard idea is still inspiring me. Who knows where I’ll go with it next? I did can a whole lot of blueberries this summer . . . .