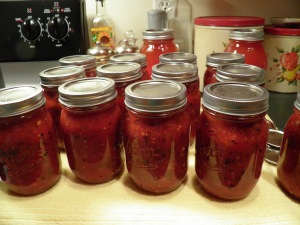 What would you say if I told you that you could make salsa without peeling peppers? To me, peeling peppers is the worst part of salsa making, and it’s avoidable. How, you ask? Well, it’s pretty simple. You just char them under the broiler. Then they don’t have to be peeled. They can be chopped in the food processor (do it with the other vegetables to avoid the sensation of being hit in the face with pepper spray when you open the top) without peeling.

In fact, if you want to make the best salsa you’ve ever canned, char everything. Yes, that’s right. Put all the vegetables under the broiler and char them all. I know, it sounds nuts, but it works.

The salsa recipe I use is from a book called Canning for a New Generation, by Liana Krissoff. I highly recommend the book because Krissoff’s recipes teach techniques that you can then use to create your own recipes.  I learned to make yogurt, apple pectin stock, and old-fashioned, lower-sugar jams and jellies from this book. And charred salsa. And oh my, that stuff rocks! I don’t feel right about copying the recipe here (as a writer, I respect copyrights), but I think sharing the technique is okay. And I just did. Char everything under the broiler for the best salsa you’ve ever canned.

Use your favorite salsa recipe for proportions, but instead of scalding and peeling tomatoes, or roasting and peeling them and the peppers, broil them. Yes, I know I’m repeating myself, but I also know that you’re going to take some convincing. I did, at first.

Core and cut tomatoes in halves and place them cut side down on a foil-lined cookie sheet. (The foil keeps the veggies from sticking when they release their natural sugars as they cook.)  Pop them under the broiler in your oven on the top rack. Let them sizzle until each tomato has a big circle of blackened skin on top. (Yes, I know it sounds insane, but it’s good, trust me!) Slide the tomatoes and juice into a bowl to cool while you work on the rest of the veggies.

Cut onions into quarters, put them on the foil-lined cookie sheets and under the broiler. Let them get blackened. Do the same thing with the garlic. (Now, I know this really sounds crazy, but again, trust me.) It’s best to put one thing at a time on the cookie sheets because obviously, garlic will not blacken at the same rate as onion. 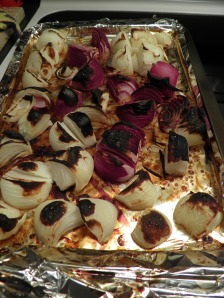 Now, for the beauty part, the peppers. As much as I hate peeling tomatoes, I really hate peeling hot peppers. In fact, I never do it. I never have to for salsa because I make charred salsa. (I know, if you’ve made a batch of salsa the traditional way already this year, I’m rubbing it in. Sorry.) I cut the peppers in half (I don’t seed mine because I like the heat, but go ahead and seed them if you wish—just wear gloves or be very, very careful) and place them cut side down on the foil-lined cookie sheet. Pop them under the broiler and let them get blackened. 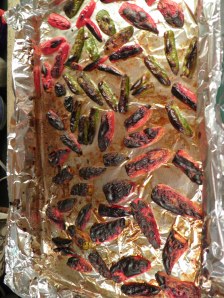 Watch out when you stick your head down to check them. You can get hit with a wave of released capsican as they’re cooking. After they’ve cooled, they release less of the stuff, even in the food processor. I use jalapenos and Serranos because I don’t like my salsa so hot I can’t eat it. This year, I had some ripe red peppers in the garden because I’m making salsa later than I usually do, and I love the mellow heat of ripe peppers. Usually, I’m stuck with green ones because that’s all I have.

All right, all the vegetables are broiled now, and are cooling. The tomatoes should be cool enough to handle, so dive in. If you want to drain off some juice to make sure your salsa is thick enough, now’s the time to do it. You can always add some juice back in later, and whatever juice is left over can be canned in pint jars with citric acid or lemon juice and salt, if you like, for 35 min. per pint. I did mine in quarts for 40 min.  I shook the jar on the left after it was cooled, before I took the picture.  It is normal for the juice to separate as in the jar on the right. 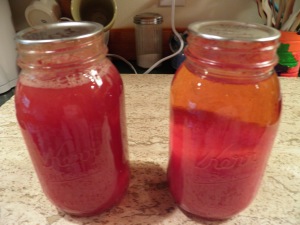 Pull the skins off each tomato half. (They come off very easily.) Tear the charred skin away and put it in the food processor with the tomatoes. I know, you’re saying: WHAT? But yes, this is the point of broiling the tomatoes, so you can get the flavor of that blackened skin into the salsa. I don’t know why it’s so good, but it is. The blackened skin is crisp, not tough, and crumbles easily into little black flakes in the food processor. It actually makes the salsa look great in the jar and in a bowl when you open it. And I guarantee you that you will get rave reviews on this stuff when you open it. I do, every time. When my kids come to my house for a meal, one of the first things they ask is if I have any salsa left. I have to hide it, or I wouldn’t.  They’d take it all home with them.  They go through what I give them for Christmas and come back looking for more!

Now, an interjection. Don’t throw away the rest of the tomato skins! Put the uncharred skins on a parchment-paper lined cookie sheet and into a 170–200 degree oven. Let them sit there until the skins are dry and leathery and no moisture remains. Then whiz them up in a blender for tomato skin powder, which can be used in various ways. See my previous post for a great pork rub made using powdered tomato skins. 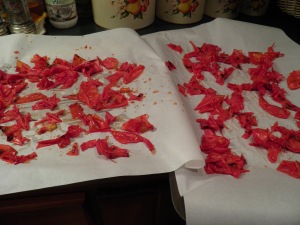 Back to the salsa. Working in batches, chop all the veggies in the food processor. I do it this way: several peppers, a handful of onions, a couple of cloves of garlic. Chop, chop; add the tomatoes and blackened tomato skins. Whiz, whiz. Dump in large pot. Start over and keep going until everything is in the large pot.

Every salsa recipe I’ve ever seen adds acid (vinegar or lemon juice), salt, and sugar at this point, and then calls for a short cooking time before the salsa goes in the jars. The recipe I use calls for apple cider vinegar, which gives a nice flavor to the salsa, but I also add lime juice because to me, you can’t have salsa without lime. It just wouldn’t be right. I also add about ¼ cup of chopped cilantro per batch just before the boiling salsa goes in the jars for the same reason. Salsa without cilantro? No way. A friend of mine adds a pinch or so of cumin. I haven’t tried that, but I bet I’d like that smoky flavor. Maybe with the next batch.

Whatever recipe you use, always pay attention to ratios. Tomatoes are acidic, yes, but peppers, garlic, and onions are not. That’s why you have to add acid to make salsa safe for water-bath canning. Don’t add extra peppers if you want hotter salsa. Use hotter peppers. Don’t add more garlic or onions than your recipe calls for. And always add the recommended dose of acid in the form your recipe calls for. I use lime juice in addition to, not as a substitute for, the vinegar in my recipe. Extra acid won’t hurt, but you can’t skimp on it and be safe.

If you use vinegar, there’s something you should know. Boiling vinegar for an extended time can evaporate the acid in it, so if you are making a large batch of salsa, like I usually do, turn off the heat on the salsa pot and put a lid on it when the first batch of jars go into the canner for processing. Don’t let the salsa sit and simmer. When the processing time on the first batch is done and you are ready to remove the jars from the canner, turn the heat back on under the salsa pot, take off the lid, and bring it back to boiling before filling a fresh batch of jars. This will ensure that you don’t boil off your acid.

Having made salsa with broiled vegetables for several years now, I’m convinced this method produces the best-tasting salsa I’ve ever had, or made. I know it sounds crazy to put blackened tomato skins into the salsa, and right up until I tasted the salsa, I thought it was nuts, but one taste did it. Give blackening your veggies a try; I bet you’ll agree with me. And the bonus? You don’t have to skin any peppers!