I’d hoped by this time to be able to report that the replacement granite countertops were in, and that we were moving on to tiling the backsplash.  We bought the backsplash tile several weeks ago, just after the first countertops that were cut wrong were installed.  We’ve just been waiting for the second, replacement installation to start tiling.

On Friday, just before I left for my big birthday weekend, the countertop installers from U.S. Granite in Reno arrived to put in the new counters.  And guess what?  They still didn’t fit!

The installers brought in the new countertops, put them down, and they didn’t fit right.  The measurements appear to be off.  Fortunately, the installers did not glue them in this time, except for the 6’ counter along the fridge wall that forms my baking station.  And then another problem was discovered.  The new granite is several shades darker than the slab off the first block, so the new counters didn’t match the two corner pieces that were being left in place.  The installers removed the sink base and dishwasher countertops before gluing or cutting and took them back to Reno.  Phone calls between the installers, the manager, and Dennis were flying back and forth when I left for my trip.  Truthfully, I was glad to escape.

So, here we are waiting for another measuring session and for new slabs to be brought in, which we will have to approve, and new counters to be cut and installed.  The previous mistakes had already added a 5 week work stoppage to our renovation, and it will probably be another 5 or 6 weeks before the third round of countertops are installed, and if they are right, we can finally go ahead with the backsplash.  Now, it is really crucial to choose slabs that will look okay with the backsplash tile, because we can’t take that back.

When we chose the slab for the second countertops, we were told by the stone supplier, Dal-Tile, that since it had been raining, the granite had absorbed water and darkened. “It’ll lighten up as it dries out,” they told us.  It was raining on Friday when the installers brought in the countertops cut from those slabs. Dennis was worried about how dark they were. “They’ll lighten up,” the installers also said.

The replacement countertops haven’t lightened up and are significantly darker, more beigey-brown than the original slab we chose, and which we like the best.  The original slab had a lot more white in it, as you can see from the pics below.  This first one is of the original slab. 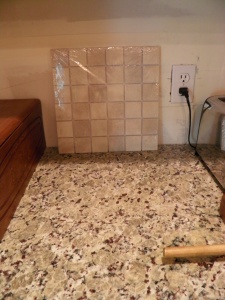 This is of the only replacement piece that was left in on Friday, and it is definitely darker than the original.

Fortunately, the backsplash tile I chose looks fine with both the lighter slab and the darker replacement, so hopefully, whatever we end up with in new slabs will also look okay. But it’s looking like they might have to replace the two corner pieces that we’d hoped to leave in, just to get a good match all around the kitchen.  The waste of it makes me sick.  However, we’ve talked them into leaving some of it behind (they’d better be doing everything they can to make us happy after all these screw-ups!), and I am hopeful that we can use some of it in the bathrooms and in my outdoor kitchen, if we ever get around to building it.

I am not a happy kitchen camper at this point, but it could be worse.  Dennis put the old laminate countertop back in so he could hook the sink up again (this makes three times now he’s taken the sink out and put it back in), so we have water.  We have a working stove.  I am grateful for that, at least. 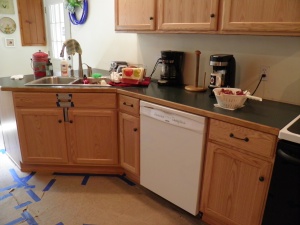 If there is a tip in all this, it’s that you shouldn’t choose your granite slab after prolonged rain unless the slabs are stored in a dry warehouse.  Even when they are sealed, they will absorb water, and it does alter the color, making matching difficult. And that can make it difficult to choose backsplash material and other things as well.

I’d also say choose your contractors carefully, but you really can’t know what’s going to happen.  I chose to do this part of the project through Home Depot because I didn’t want to have to deal with contractors directly myself, and because we don’t know anything about any contractors in Reno, and there’s no one locally who installs granite.  We trusted Home Depot to work with contractors who can get the job done right.  Now we’re talking with Home Depot about how they’re going to make things right with us, because this foul-up has caused some significant inconvenience in our home and lives.