Do you have a stick blender (a.k.a. immersion blender)? An egg? Some good oil? Some fresh lemon juice or apple cider vinegar? If so, you have the makings of the easiest,  healthiest, and best mayonnaise you’ll ever taste.

Recently, I read an article about twenty-one foods that were supposed to not only prevent arterial plaque build-up but to actually clear out plaque deposits. One of those foods was avocado. Now it happens that I had just found quite a bargain on avocado oil, normally rather expensive, at our local Grocery Outlet. And it also happens that I was out of mayonnaise and couldn’t find a brand I wished to buy. I’ve gotten rather picky about my mayo in the last few years, and I don’t buy bargain brands of mayonnaise any more. They just don’t taste right.

So, avocado oil, no mayo, and an ah-ha moment. I’d read about stick blender mayo about a year ago, had meant to try it, and had just never gotten around to it. Besides, there’s not much point in making mayonnaise when you have a great big jar of Best Foods from Costco sitting in your fridge. But now, convergence.

There are so many different stick blender mayo recipes on the internet, it was hard to choose one. Then a particular recipe was recommended to me, so that’s where I started. Here is the link to the recipe I began with, although I altered it a bit, and ended up with the most delicious mayo I’ve ever tasted. Dennis didn’t really want to taste it because he’s not that fond of mayonnaise and usually only puts spicy brown mustard on his sandwiches, but when I insisted, he said, “Mmmm. Wow, that’s good. Way better than store bought. I’m going to start putting that on my sandwiches from now on.”

I rest my case.

Now, this is where the fun begins. You need a container to hold your ingredients that will also hold your stick blender. I used a jar I’d saved, because I could mix the mayo right in the vessel I intended to store it in. You can use a plastic container, or a deep bowl, and transfer your mayo after it’s made to any storage container you like.

When all the oil has been mixed and your mayo is creamy white and thick, you’re done. 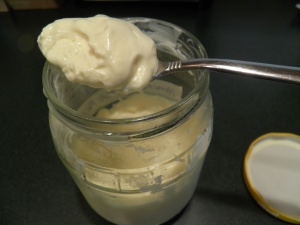 Turn off the blender, remove it from the vessel, and scrape off all that lovely lusciousness. Your mayonnaise should last for several weeks in the fridge. Because it contains no preservatives, it will not last indefinitely like store bought mayonnaise. But that’s okay—it’s so easy to make, whenever you run out, a fresh batch is only 30 seconds away!

Notes: *Using raw eggs scares some people. There’s a process for pasteurizing eggs at home if you’re one of those folks. I just use the freshest eggs I can buy whenever I have a raw application, and I don’t worry about it. In this case, I think the combination of oil and acids in the vinegar (lemon or lime juice can also be used) and mustard, as well as the salt, makes for a pretty safe combination. And the addition of the **active culture yogurt is also said, according to some, to keep the mayonnaise fresh longer.  I found a recipe for coconut oil mayonnaise, not made with a stick blender, but which I would very much like to try with a stick blender, that uses Greek yogurt and whey. Whey is simply what drains from the yogurt and contains the lactobacilli which make milk into yogurt, so adding active culture yogurt has the same effect.  ***For oil, you can use any light-tasting oil: extra-light olive oil, grapeseed oil, avocado oil, walnut oil. Strongly flavored oils, like extra virgin olive oil, may cause your mayo to be too strongly flavored.  I stay away from canola oil because it is one of the commercial crops sprayed with glyphosate herbicides.

I now have about 1 ½ cups of avocado oil mayonnaise so good I can’t decide exactly what I’m going to do with it. Sandwiches, of course, maybe some tuna salad or egg salad. Homemade buttermilk salad dressing? Potato salad? How about a little mayo mixed with some lemon juice and lemon zest as a sauce for steamed broccoli or asparagus, or perhaps a dip for artichokes? I am going to have some fun!