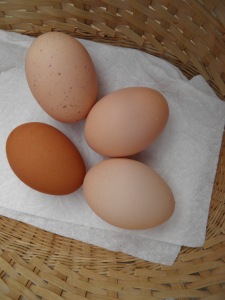 Some of you will think I’m crazy.  But I’ve tested my theory several times, and each time I’ve found it to be true.  When I give my chickens a little kombucha several times a week, their eggs are almost completely clean. When the kombucha is withheld for several days, the eggs get poopy.

First off, some folks might not know what kombucha is.  Kombucha is fermented tea.  It’s fermented with some particular strains of bacteria.  You can make kombucha at home using raw, unflavored kombucha purchased in a health food store or obtained from someone who makes her own kombucha.  If you are interested in doing that, here’s the link I used to start my kombucha and SCOBY.  (The SCOBY is what grows in the kombucha.  The kombucha is the fermented tea that you drink.)  Kombucha is probiotic, very good for your gut.  And presumably, for a chicken’s gut.  Did you know they actually make probiotics for chickens? Yeah, that’s a thing. Some people buy probiotics for their chickens.  Some people feed them yogurt regularly.  I feed mine a little kombucha several times a week. And they love it.

Now, I’ve done a little research, and caffeine is apparently toxic to chickens (as it is to dogs). You’re not supposed to give them chocolate, tea bags, or coffee beans (I don’t know why anybody would, but nevertheless, you shouldn’t.)  However, many people do allow their chickens access to freshly brewed coffee grounds dumped in the compost pile, and these folks report no ill effects from the chickens eating the coffee grounds.  From what I understand from my reading, minute amounts of caffeine in things like spent coffee grounds doesn’t seem to hurt them.  I think small amounts of kombucha is probably the same. (You’re also not supposed to let chickens eat apple seeds, but mine ate windfall apples in the orchard all last fall. And when they eat an apple, they don’t leave anything but the stem.) So I think we can use an ounce of common sense here along with the kombucha.

I don’t give my four chickens a lot of kombucha at any one time, and I give it to them mixed with some scratch grains.  I put the scratch, about 1/3 cup or so, in an old pan, and pour on about a tablespoon of kombucha, or enough to just moisten the scratch.  I swirl and toss that around to coat all the scratch in the kombucha, and I let it sit for a minute to absorb the kombucha while I’m getting out their laying pellets.  I feed those separately.  They get the scratch/kombucha supplement about every other day.

How was it that I began giving kombucha to my chickens in the first place?  In the summer of 2015, I was trying fermented feed for the chickens, for the probiotic effect, and I was using kombucha as a starter, mixing it in with their pellets and scratch and letting it ferment for 3 or 4 days before I gave it to them.  But with colder fall temps, fermenting the feed in the unheated pumphouse wasn’t working.  And it was another task when I really didn’t need another task. Then I thought, why bother with all that?  I have lots of kombucha, and it is easy to make more if I need it.  I could just keep a jar of it with their feed to mix with their scratch.

I did a little reading, noticing that many people reported giving their excess kombucha SCOBYs to their chickens, and I’ve done that too.  The chickens eat them like worms. No one reported any problems, and the SCOBYs retain quite a bit of kombucha in their layers. So I figured, why not?

I started noticing, a week or so after I began the kombucha regimen, that the eggs were clean.  Not just cleaner, but clean.  Rarely did I even get a little streak or smear of poop on an egg.  The majority of my eggs were pristine, like they’d been washed.  The change was noticeable, because they were pretty poopy before.  So I had nice, clean eggs all fall and into the winter.

In late winter, I came down with a bad case of influenza.  The old-fashioned stuff.  I was sick, really sick, for over a month.  During that time, Dennis took over feeding the chickens, and I hadn’t told him about the kombucha.  Didn’t even think about it until I was well enough to scramble myself an egg.  And then I noticed that the eggs were poopy again.

I told Dennis about the kombucha/scratch combo, and he started doing it.  Within a couple of days, the eggs were clean again.  No fooling.

Since then, we’ve had chicken minders for a week or so, at least three times, while we were gone on vacation.  I never tell them about the kombucha or ask them to do it because I don’t want the chickens getting too much kombucha. You never know how well people are actually listening when you tell them how to do something. Each time when we’ve returned, the eggs are poopy.  And each time, after a few days back on the booch, the eggs are clean again when I gather them.

The last time we left, the neighbor boy who was minding the chickens put a half-pan of dry scratch in the run for the hens so they had 24/7 access to it, something I never do, but it proved one thing to me.  It’s definitely the kombucha, not the scratch, that’s keeping those eggs clean.  I’d had a slight, niggling doubt about that, but this time was the clincher. I had poopy eggs for two days after we got back, until those chickens got some kombucha back in their systems.

In the first picture below, you can see that the eggs are very clean.  I don’t wash my eggs until I use them, if I need to wash them.  (If you have backyard chickens, you know why, but for those who don’t:  the reason you don’t wash eggs until you want to use them is that when the chicken lays the egg, it comes out with a protective coating that seals the shell and prolongs the life of the egg inside.  Store-bought eggs are washed, and they have shorter shelf lives than unwashed backyard eggs.) In the second photo, I’ve tried to take a close-up of the only egg in this carton (gathered over about a week’s time) that has any sign of poop on it.  It’s just a faint dark smear (not the reddish speckles–that is just pigment in the shell), and might not even be poop.  It could just be a smear of dirt from a chicken foot.  This is typical for my eggs when the chickens are getting kombucha at least three times a week. 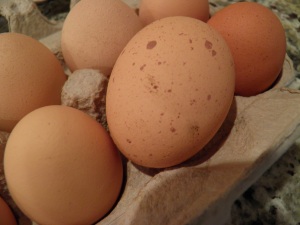 Kombucha for chickens makes cleaner eggs.  I don’t know why.  I could speculate, but I don’t know enough about the anatomy or digestive system of a chicken.  I just know it works.