Writers are urged to avoid clichés, to find fresh ways of expression.  But with my interest in history and language and the history of language, I’ve always loved clichés. Buried in them are remnants and glimpses of the past.

Take, for instance, the phrase, “clean slate.”  I once thought the phrase went back to school children who must have been told by their teachers to start a new lesson with a clean slate, the only form of writing material many frontier children had.  Most of us are familiar with this from Little House on the Prairie, either the books or the television series, and from other books and movies, like Anne of Green Gables. But the phrase and its antecedents are much older than that.

“Clean slate” is actually a term used for a grade of slate, a type of rock that breaks relatively uniformly along a straight plane.  It was once prized for roofing material, and eventually, small, reusable writing tablets as well as larger, wall-mounted chalkboards. I couldn’t find a reference for the age of the expression as a builder’s or geologist’s term. But the metaphoric concept of a clean slate is embedded in the Latin phrase, tabula rasa, which means “erased tablet.”  This expression comes from the way wet clay tablets were used in accounting in ancient and paperless cultures, scraped clean of marks while still damp and used over and over. (If the clay tablet were allowed to dry, it would form a permanent record.  Cuneiform writing on clay tablets tells the story of ancient Mesopotamian life five thousand years ago.)

Apparently, the term “clean slate” also comes into common use in English as an accounting expression, and derives from tavern owners’ habit of using a slate to keep account of a customer’s “tab.” When the tab was paid up, the customer’s line on the slate was wiped clean.  But I digress, as usual.

Today, “a clean slate” has become so common, it’s now cliché. It’s shorthand for a fresh start, a beginning place after the old rubbish has been cleared away.  And that’s exactly what we’re finally getting to in this kitchen.  A clean slate.  I’m hoping that my brief historical exploration of the phrase demonstrates that I use it purposefully.  And if doesn’t, I don’t care.  I like clichés.

Most of the kitchen’s slate has now been wiped clean.  While I was sick with the flu this past week, Dennis finished removing all the old cabinets and the old flooring.  He’s down to the subfloor now.  God bless him for continuing on when the driving force (me) was laid low.  (Yeah, I’ll work in as many clichés as I can this time.)

Originally, we thought we were going to nail and glue the new flooring over the old vinyl, which was glued to particle board, which was nailed to the subfloor.  But we were advised by our former builder friend, Leonard, to strip off the vinyl and particle board and just nail in the new oak strip flooring.  Dennis and I were both relieved to be relieved of the necessity of applying the very messy glue (and getting it right), but removing the top layer of the old floor meant more work to prepare the kitchen for the new flooring.

And now there’s a hard deadline to work toward.  The countertop fabricator will be here on the 29th to measure for the countertops, which means the cabinets have to be in.  The cabinet shop is scheduled to install cabinets on the 25th, and if they don’t finish in one day, they’ll come back on the 28th, so the cabinets will be in for the countertop measurements.  Those dates can be pushed back if necessary, but the longer we wait to measure for the countertops, the longer it will take to get them fabricated and installed, and until they are installed, we don’t have water in the kitchen.  The sink has only been out for a few days, and already the inconvenience is, well, inconvenient.  We don’t want to be without a sink and water in there one day longer than necessary.

So, after a period of waiting for the flooring to acclimate to the humidity and temperature in the house, and working on the wall in the meantime, it’s a hurry-up atmosphere around here.  And there’s a complication.

Before we started ripping the kitchen apart, we had an ant problem.  The warmer than normal temperatures in January woke up some insect life (I actually saw mosquitoes in February), and we had an ant invasion along the outside wall of the kitchen, and where the kitchen and living room walls join, in one corner of the oldest part of the house.

This is nothing new for us. We’ve been invaded before in years past; I always tell Dennis it’s just part of the price we pay for living in the woods, and I’m okay with that, although it can be disconcerting.  Twice I’ve woken up in the morning to find a swarm of thousands of ants on the tub surround in the back bathroom.  They come in around the window, somehow. These are small black ants, and they don’t seem to be looking for food.  I’m not sure exactly what they’re doing, but I think they’re moving house.  We’ve seen them do this outside many, many times in the 35 years we’ve lived in this “cabin” in the woods.  Every spring, these small black ants go on the march.  I think their populations get too big for the nest, and off they go, looking for another place to build a new nest.  They follow straight lines that you can track back for yards and yards (to a tree or the wall of an old building, and there are several such on our property), and they don’t care that their straight line means marching through the house, although they seem to get very confused once they get inside and hit a perpendicular wall.  They swarm in a corner, maybe trying to figure out how to keep going straight, or maybe deciding if this is a good spot to build a new nest.  The swarming makes it relatively easy to spray them, wait for them to die, and then wash everything down.  (I don’t like using chemicals, especially inside the house, but it has to be done.  Dennis always says, “The label on the spray says it’s safe for inside the house,” and I always insist on washing everything down thoroughly anyway. But I digress again.)

We thought we might have an ant nest inside one of the walls of the kitchen, so after he sprayed around the door, window, and wall in the kitchen, Dennis crawled under the house to see what he could see.  He didn’t find any trails of ants or ant nests, but what he did find was a sill plate (a piece of wood that supports a beam that supports the floor joists) that has dry rot in it.  It is under the newest part of the kitchen, the part that we think was added in the 70s when the back part of the house (bedrooms and bathrooms) were built on to the original living room and kitchen.  We know that about six feet of new space was added along the back wall of the kitchen because of the way it was constructed.  Dennis was going to have to replace the rotten sill plate from underneath the house, which would have been difficult, but not impossible.  (Personally, it sounds impossible to me, but he did it once before in another spot, many years ago.  My hero.) But because we decided to tear off the old flooring, he plans to take up the subfloor in that area and replace the sill plate from above.  Pictures from that effort should be interesting, when it happens later this week.

Once the work under the house is done, he can replace the subfloor, top it all off with a layer of plywood to level the older part of the kitchen floor with the newer part, and then we can finally start putting down the new oak flooring.  It should go fairly quickly at that point, because we don’t have to mess with glue, just nail.  Phew!

It’s been a long process, with a lot of hurry-up-and-wait, getting to the clean slate.  We’re not quite there yet.  But once we are, we’ll be able to start writing on the slate again.  And I’m getting so excited for that day! (I think Dennis is too.  He misses his cookies. I can’t really bake in the trailer oven.) 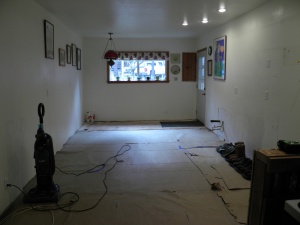 In the meantime, it’s chaotic inside and outside the house, with all the kitchen appliances and furniture and boxes of flooring and cupboard contents stacked in the living room, and the old cabinets stacked on the patio under the overhang, waiting to be moved and installed as storage in pumphouses, sheds, and “barn.” 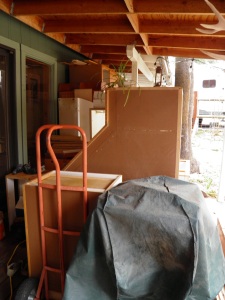 I have my tea station set up in the small hall bathroom, the microwave and Dennis’s coffeemaker in the bigger master bath, and Dennis has moved the travel trailer down into the driveway, closer to the house, so we can wash dishes and cook out there.  It’s chaos, but controlled chaos.  Another cliché.  Yep, I just love clichés.